It's Monday and I've spent most of last week getting all the stuff ready for updating the website. It's now with the webmaster - my very clever and obliging son, Conrad - who will be getting the work done on it as soon as he has the time available.
Seeing he does all this work in his spare time, don't expect it to be up and running overnight. Just keep checking and it will all happen in the fullness of time!
The final figures are in from the Melbourne International Comedy Festival and I'm extremely happy to report that we not only covered expenses but actually made a small profit! WHAT a relief! We don't have to sell the house, sell my husband for medical experiments, or go on the streets!
Lots of promotional packages have gone out to prospective production companies and there is definitely some interest out there. All we have to do is convince someone that we have a successful, money-making, popular show to put before the public. And there are a lot of people who were in our audience who believe just that!
It's been a wonderful - if exhausting - experience. Hopefully, it will now find someone who will take it further.

return to: www.sillyoldbuggers.com.au
or: www.gilianmwadds.com.au
Posted by Gillian at 6:38 PM No comments:

Well, of course they'd all be good, wouldn't they? I'm not going to put them up here if they're NOT, am I?
Although, to be really honest, there is one that came from the website that expresses some surprise about a certain subject in the play - and I am publishing that one too.
Here they are...

QUOTES FROM SATISFIED CUSTOMERS –
Some from Feedback Form on http://www.sillyoldbuggers.com.au/
Some sent by card or letter, some standing around talking after the show.
NOTE: I have obtained permission to use these quotes but have undertaken not to publish addresses. These can be verified with me if necessary.

Absolutely Silly Old Buggers was thoroughly entertaining with clever and amusing lyrics. It obviously makes connection with its audience who clearly enjoyed it.
Alan Hopgood (Writer/Actor)

" Absolutely Silly Old Buggers is a delicious look at aging. A warm, poignant and very amusing blend of songs and pithy dialogue performed by a talented cast. I highly recommend the show for all age groups!"
Alan Fletcher - "Neighbours" actor

The computer song was cool. It should be on YouTube. Matthew (17 yrs.)

Name of sender: Michele
Request news updates: Yes
------------------------- COMMENTS -------------------------
Dear team and cast...
Went to your show at the swiss club last night-I am a confessed Melbourne Comedy Festival advocate (I could have said junkie!)and chose it out of the extensive program.
Just wanted to say how much I enjoyed the show...it was great fun but made some very true social and personal comments. I guess I was surprised a bit by the force of the "pull the plug " song while amused by the great lyrics and characterisation throughout...as a just 50 something is this what I have to look forward to? No not at all! but yes in some ways the resonance with reality was clear.
Congratulations on a great performance full of so much life and fun and music! Hope the rest of the festival is a resounding success for you!
Regards
Michele

After the show: - At the bar, around the tables:

Absolutely Silly Old Buggers was absolutely hilarious. When is it showing again? Loved it! Marilyn

I thoroughly enjoyed the show and if I could I’d go again. The music was fantastic and the lyrics clever and very funny. I’d give it twelve out of ten!
Peter Sadler

There it is, folks! The vibes are all good and we're hoping we'll have some good news to share before too long! Stay tuned...

Return to: http://www.sillyoldbuggers.com.au/
or: http://www.gillianmwadds.com.au/
Posted by Gillian at 5:21 PM No comments:

VIDEO WORKING! Now for some stills...

Yesss! I've just checked the new video upload and it's working beautifully. The duration is about 2 minutes 45 seconds and if your connection is a bit slow and it keeps stopping - bear with it for the first run through. Once you've suffered through the stopping and starting process, you can start it again and it will play straight through for you.
Now it's time for a few photos ..... 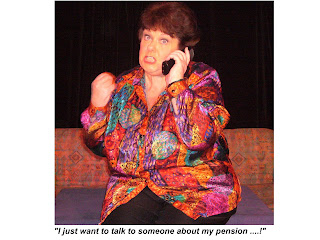 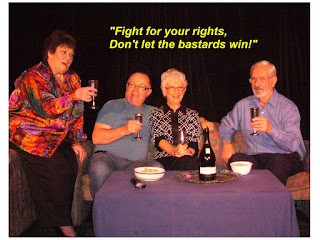 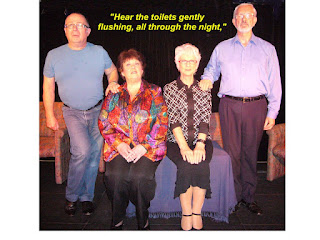 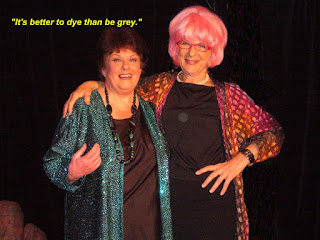 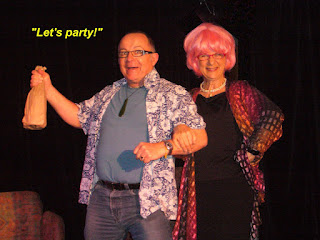 There's lots of talk about the Silly Old Buggers happening out there and I'm pleased to note that our website is still getting 15 to 25 hits per day even though the show finished nearly two weeks ago - so someone is interested!
The promotional package is ready to go and will be sent out to likely production companies early next week. Wish us luck!!!
Back to: www.sillyoldbuggers.com.au
or: www.gillianmwadds.com.au

Well! I THINK I've uploaded a video clip - the finale of our show! It took forever to load and I'm still not quite sure it's working - but I'll publish it and see what happens.

If it's okay, I'll put a few stills from the show up as well.

Posted by Gillian at 8:16 PM No comments:

It's over a week since the season in the Melbourne International Comedy Festival at Swiss House finished - two weeks of excitement, achievement and very real success. Whew!!
We started the season with some bookings and I confess to sleeping very little for the two weeks prior to our opening. My main worry was: What if nobody comes?
I saw the first performance on Tuesday, 14th April and knew that I had no reason to worry about the state of the show itself. The whole thing went with a bang and cast and audience obviously enjoyed themselves. From then on, ticket sales steadily increased. We had a good review in the Age - three stars - on Monday, 20th April and during that second week our audiences grew bigger and bigger and more and more enthusiastic.
We had people staying back to talk to us after the show asking about how they could get to see it again. Would it be travelling around the suburbs? Were there tickets available so they could come again and bring friends? Cards and addresses were exchanged so people could keep in touch with latest developments and I now have quite a list of potential supporters.
We've had regular feed-back from happy audience members through the Silly Old Buggers website and it's still getting between 15 and 24 hits per day, so there is still plenty of interest out there in the show.
My job now is to put together the whole promotional package and see if I can find someone prepared to take the show on as a commercial proposition.
I spent the first few days after we closed trying to edit a video together which would include some close-ups as well as a long shot of the whole show - only to end up totally frustrated. My computer is not powerful enough to do all I want it to do and it seems that my software is also not quite new enough to recognise my new video camera. I haven't time or money to spend on updating and learning new technology so have ended up with just the one straight-through video of the performance on Friday, 24th.
We had a big and very enthusiastic audience that night which means lots of applause, clapping along and a few cheers in the background, and that can't be bad! The limitations of the venue - lighting, distance, framing, etc. - are a problem but I think the end result is adequate as a demonstration of what the show is like and how it was received.
The rest of the promotional package will have the tickets sales summary (which is really quite impressive), some still pics, the Age review and a selection of comments from audience and VIPs who were there and enjoyed it.
I'll be updating this blog again fairly soon, when I've finished the promotional stuff and have time to add some pics and maybe a video clip. I just can't face all that technology again right now!
So - keep your eye on this blog for further developments.
Back to: www.sillyoldbuggers.com.au
or: www.gillianmwadds.com.au
Posted by Gillian at 5:03 PM No comments: